Karolina Strand is an experienced classical singer with organist training at the
Malmö Academy of Music in Sweden. She furthered her education in singing and
song technic at the University College of Music Education in Stockholm.
She is often performing as the alto soloist in sacred music works while also
performing together with various chamber music groups in concert including
Trio Enchantée.

Trio Enchantée is comprised of Karolina Strand - voice, Mikael Ekholm - flute
and Eva Lundgren - piano.
The trio has played together since 2010 and has music from various epochs in
their repertoire. The group has a fondness for French music.
In 2015, the group worked on a programme called ‘The Colour of Music’ which
included a newly composed piece written for Trio Enchantée. Staffan Storm
composed the music to lyrics by Britt G. Hallqvist and visual artwork that was
shown accompanying the music was painted by Emilia Linderholm. In May of
2016, Trio Enchantée toured Japan with concerts in Yokohama and Tokyo.
During the summer of 2016 the trio performed a concert called ‘Songs of
Eventide’. This performance included Scottish, English and Irish Music.

The trio further developed their project of art and music thanks to a grant from
the Sten K Johnson Foundation. That program included a film made of the process when a painter works on her painting. 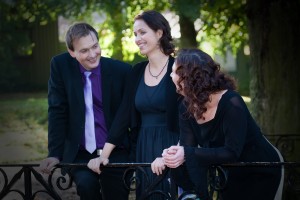